Book Spotlight & Giveaway: In the Line of Duty by Carolyn Arnold 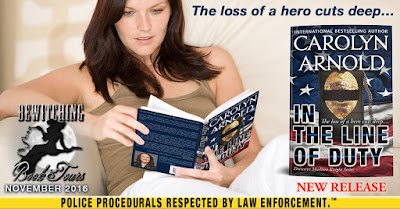 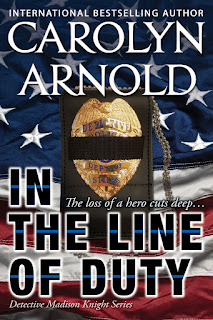 He devoted his life to seeking justice. But would she get any for him?

It was an ordinary day for police officer Barry Weir. It was the end of shift, he was tired, and he just wanted to get home to his wife and kids. But someone had other plans for him, shooting him down and forcing him to make the ultimate sacrifice.

When news of Weir’s murder reaches the department, it leaves Detective Madison Knight and every cop in the Stiles PD itching for revenge. It cuts Madison’s boyfriend, colleague, and Weir’s childhood friend, Troy Matthews, deepest of all, driving him away from everyone he loves just when they need one another the most.

With evidence pointing to a gang-related drive-by, Madison and her team investigate the town’s seedy underbelly in search of justice for their fallen brother. But the deeper they dig, the more convoluted the case becomes. Now they need to figure out if this was a random shooting as part of a gang initiation, a straight-up hate crime, or a targeted kill. But with members of the Stiles PD under attack, they have to do it fast…before more officers pay with their lives.

Troy was pacing the halls of the station, wandering one direction, then backtracking. If someone saw him, they’d think he’d lost his mind. And in a way, he had. It was then that he heard footsteps coming toward him. He found himself hoping it wasn’t Madison.

He took a few deep breaths, prepping himself to face a barrage of questions. And if he heard How are you doing? one more time, he might really lose his temper.

Barry had been dead for only a few hours. How exactly could anyone just shake that off?

“It got pretty heated in there.” His sister caught up to him and jacked a thumb over her shoulder toward the squad room, even though he was already around the corner and down another hallway.

“Don’t start what exactly, Troy?” Andrea was resigning to her eldest sister voice, the one that rang through with an air of maturity and sense of being in charge.

“Anything, all right?” He turned his back on her and started to walk away.

“Have you even been over to see Joni and the girls yet?”

He stopped walking and took a deep breath. He didn’t bother to face her. “Don’t mother me, Andrea.”

“You can’t make this better. You can’t bring him back.”

Anger swelled in his chest and he was on the verge of tears, and he freaking hated it. This unraveling person he was becoming wasn’t who he really was. He was always put together. Reserved. In control. He took another breath and faced his sister. Her eyes were full of tears, and her facial features softened under his gaze.

Damn it! He didn’t need her pity. He’d be fine…on his own.

“Maybe you should sit this investigation out,” she said.

“Is that your sisterly advice?”

She lifted her chin, and her gaze flicked away.

“Andrea, don’t do this.” A heaviness sat on his chest, squeezing his heart and lungs as if they were in a vise.

“As the police chief, I have to look at the larger picture. Your emotional state isn’t the most conducive—”

“Fu—” He pointed a finger in her face and dropped it. “You know what? Do whatever the hell you have to. But you know that I’m the best person to have on this case. I won’t stop until Barry’s killer is behind bars.”

Silence stretched out between them. She was scanning his eyes, trying to read them.

“I’m probably making a big mistake here,” she started, pausing only to give him further scrutiny.

He wasn’t going to say another word. Why give her fodder? He was at her mercy. All he knew was if he tried to justify his abilities any more he’d officially be off the case. Still, it was hard to resist saying anything. He was about to say her name, ignore his gut telling him to keep quiet and plead his case, when she spoke.

“I’ll let you stay on the case.” Her gaze was laser-focused on him. “But you have to promise me something.”

He felt like his lungs could expand again. “Anything.”

“If you find it’s too much—” she put her hand up to stave off his defensiveness “—you promise to remove yourself from the investigation.”

He shook his head. “That’s not going to happen.”

Another officer walked past them. Once he was out of earshot, Andrea put a hand on Troy’s shoulder and said, “Okay, but get over to see Joni.”

His heart sank in his chest. What was he supposed to say to Joni? Pile on more condolences, bury her so deep that she choked on the inevitable truth that her husband was gone?

Andrea was trying to make him accountable, but he had so much to do, didn’t he? He should at least get started with his men on gathering intel on the Hellions and pulling prior criminal history.

His thoughts had gotten so carried away with the job, he’d almost forgotten her question. He met her eyes. “You’ve given me a second chance, and I’m not going to blow it.”

She tilted her head. “So when are you going to go over to see her?”

“There’s a lot to do.” Troy made a show of looking at his watch. “And time’s moving quickly. I’m of better use to Joni here—finding her husband’s killer.”

I’m not ready to be strong for her yet…

“All right, fine.” She sighed.

Fine was never fine for a woman, but he was just going to pretend it was and run with it. He waved to her as he headed for his desk.

ABOUT THE DETECTIVE MADISON KNIGHT SERIES

Murder. Investigation. The pursuit of justice. Do you love trying to figure out whodunit? How about investigating alongside police detectives from the crime scene to the forensics lab and everywhere in between? Do you love a strong female lead? Then I invite you to meet Detective Madison Knight as she solves murders with her male partner, utilizing good old-fashioned investigative work aided by modern technology.

This is the perfect book series for fans of Law & Order, CSI, Blue Bloods, Rizzoli and Isles, Women’s Murder Club, and Hawaii Five-O.

Read in any order or follow the series from the beginning: Ties That Bind, Justified, Sacrifice, Found Innocent, Just Cause, Deadly Impulse, In the Line of Duty, Life Sentence (Bonus Prequel). 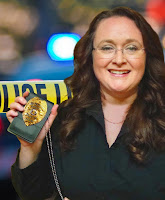 CAROLYN ARNOLD is an international best-selling and award-winning author, as well as a speaker, teacher, and inspirational mentor. She has four continuing fiction series—Detective Madison Knight, Brandon Fisher FBI, McKinley Mysteries, and Matthew Connor Adventures—and has written nearly thirty books. Her genre diversity offers her readers everything from cozy to hard-boiled mysteries, and thrillers to action adventures.

Both her female detective and FBI profiler series have been praised by those in law enforcement as being accurate and entertaining, leading her to adopt the trademark: POLICE PROCEDURALS RESPECTED BY LAW ENFORCEMENT™.

Carolyn was born in a small town and enjoys spending time outdoors, but she also loves the lights of a big city. Grounded by her roots and lifted by her dreams, her overactive imagination insists that she tell her stories. Her intention is to touch the hearts of millions with her books, to entertain, inspire, and empower.

She currently lives just west of Toronto with her husband and beagle and is a member of Crime Writers of Canada and Sisters in Crime.