Author Interview & Giveaway: Waiting for a Girl Like You by Gina Conkle 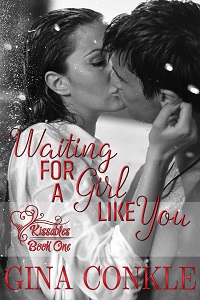 Waiting for a Girl Like You
Kissables
Book 1
Gina Conkle

Proper Care and Feeding of a Broken Heart

Bookstore clerk Abbie is off-the-charts nervous her first night moonlighting in a sex-for-hire job. If she only kept her mouth shut…but nothing goes as expected, including the intense blue-eyed surfer who walks through her door. Mark wants to work out a few kinks —and leave the lifestyle for good. Past mistakes still haunt him, but sweet Abbie turns Mark’s plans upside down, and two broken hearts discover honesty is the hottest aphrodisiac.
Anything But Safe

Former trophy wife Jennifer wants to thrive again, but when her new life hits a speedbump, her unlikely hero is rough working man AJ. The woman AJ rescued is out of his league, but the two together are magic. Jennifer smooths his hard edges, and when she’s with AJ, her true, quirky colors show. A surprise threatens to derail the two who quickly learn…love is anything but safe.

Excerpts: Waiting for a Girl Like You (2 stories in 1 book)

The Proper Care and Feeding of a Broken Heart (story 1)

My cheeks burned but I stood taller. “I don’t know what Mrs. Smith told you but when she said ‘fresh face’ that was code for I don’t know what I’m doing. I’ve never done this before. Any of it. Not sex for hire. And certainly not BDSM. Much as I want to bolt, I need the money. So can we get this over with?”
Another dry chuckle. “You know how to get a man going.”
I glared at him through my bangs and hugged myself tighter. Music pulsed from the room next door, but I couldn’t say what the song was. Did they need a sound track to get going? The frazzled side of me surrendered to how little I knew about sex. Despite standing bravely, I was small and adrift on an unknown sea.
Surfer Man stepped within touching distance, his blue eyes on the verge of grey, lit with a strange mixture of hard shell and tender patience. A faint line traced the left side of his mouth like contempt came easy.
“First rule,” he said evenly. “You only talk when spoken to.”
“Then what am I supposed to call you?”
The question startled us both. I was throwing out the no names rule and for good reason. Something dawned on me. With the closed door, it was just the two of us. This square room was my island. Control could go either way. Surfer Man’s mouth opened, but an adrenaline rush took over and my hip cocked sideways. In the world of fight or flight, my body tensed with its version of fight.
“Oh, let me guess. You’re going to say Call me master or some crap like that. I work at a bookstore. I’ve read those please spank me Mr. Billionaire books.”
I liked a few of them. Reading the books was one thing. Living them was another.
One side of his mouth curved up. “Maybe you should tell me how you really feel.”
I exhaled slowly, blowing bangs off my forehead. No sense in telling him what I really thought. Talk about a mood killer. No man wanted to hear me say this place is for losers who can’t find a girl. Yet, this guy was no loser.
“Real billionaires don’t look like you do in those jeans of yours.”
He chuckled, his blue eyes flaring wider. “I’m no billionaire.”
Oh, but you are one hot man. Thankfully my filter worked and I kept that to myself.
“You know what it is? It’s the whole BDSM scene thing. Sex isn’t a scene. It’s sex. Two people being honest skin to skin.”
Sinews under his forearms flexed while music cranked louder in the next room. His hard shell scrutiny narrowed, and I cringed. Sneering at my customer’s preferences wasn’t a smart idea. How he got his rocks off was his business.
“Honest sex.” He let the words settle in his mouth. Surfer Man shook his head and made for his gym bag.
“What? Are you leaving?” My voice notched higher. I didn’t want him tying me up, but I didn’t want him to leave.
“This wasn’t a good idea.”
Scowling at me, he stood under the bulb, the red light pouring over him. How was it a nice looking man in his thirties paid a hefty price to tie a woman up yet he was the one getting all contorted about it? I was pretty sure he could get the average beach bunny to shed her bikini and play sex games for a night. Unless his tastes ran too dark.
I eyed the bag at his feet. Dust lined a few creases. “Maybe we could talk instead.”
He laughed harshly. “You’re naked. I paid for sex with a pretty woman.
Not conversation.”
“Want me to cover myself with the sheet?”
“No,” he said, his face screwing up like I wasn’t playing with a full deck. “I don’t want you to cover yourself.”
Feet planted wide, the bulge in his jeans was gone. The lost reaction bugged me. He didn’t find me attractive anymore? To add to the strangeness, my reversal irked me. I should be glad. I could run down the hall, grab my clothes and purse, and run out the door and never come back.
Red-tinged light cast shadows over his features. He set both hands on his hips, his raw voice reaching out to me. “Why do you want me to stay?”

Anything But Safe (story 2)

Tendons stood out on AJ’s neck. If she read him right, he was flummoxed by their sizzling chemistry. What made this different was liking each other so quickly. It was powerful. Overwhelming and mind-consuming. Conversation flowed naturally. She’d dumped her troubles at his feet last night without a second thought. AJ listened. And when things weren’t hot and heavy, he was fun. She needed fun.
His long legs stretched out under her old table last night did things to her. Her nerves shot to life when predatory blue eyes tracked her movement in the kitchen. AJ was different. Comfortable and uncomfortable at the same time. And his thoughtfulness with the herbs? She wanted to kiss every inch of skin on his body.
“No need to glower at me,” she said. “You brought up how different we are last night right after I got into your truck.”
His mouth’s hard line softened. “That’s what’s bugging you?”
“It didn’t bother me. Not at first. Then, after Richard’s call, I wondered if I was making another bad decision.” Her voice faded. “You were a great listener, but it crossed my mind that you were after one thing and one thing only.”
AJ’s crystalline blue eyes pierced her. “Sex.”
The nicest shiver ran down her legs. “Yes.”
Hot sun beat down on the rest of the world. It was August. Standing under the pepper tree, AJ was a tall, cool drink of water. Stained coveralls didn’t put her off nor did his tattoo and the rough cadence of his speech. Under the gruff exterior was a real man with a good heart. He visually devoured her every time they’d crossed paths around town, and last night was no exception. But, could she be content with a sex only fling?
“Well, that’s a relief.” Faint sarcasm edged his last word.
“What is?”
His steady gaze never wavered. “I thought you might be going in a different direction.”
She cocked her head. “Did you think I was about to give you the ‘let’s be friends’ talk?”
“I thought you were about to give me the ‘let’s hook up for sex only’ talk.”
“Oh AJ,” she said around hiccups of laughter. Her cheeks burned. She shook her head, a little dazed. “I…I don’t know what to say to that.”
“It’s not the first time a woman like you propositioned me.”
Eyes rounding, she laughed at the absurdity. “I’m not propositioning you.”
“Good because my answer would be no.”
She’d come for lunch and conversation of the talking variety. A kiss or two was more than welcome, but they needed to slow down, let things simmer. AJ’s forbidding frown told her some of Hidden Valley’s well-shod women had dallied with him, and he was having no more of it. The town was an eclectic mix of gated communities, small farm-to-table co-ops and wineries. A lot of working class people had lived here long before it was hip.
Hurt bloomed in her chest at the idea of any woman taking advantage of AJ’s goodness. Or his body. His past was likely more colorful than hers, but his flat out refusal to hook up intrigued her. He’d messed around in the past. What made him change his mind?

Gina Conkle writes Viking, Georgian, and contemporary romance. She grew up in southern California and despite all that sunshine, she love books over beaches and stone castles over sand castles. Now Gina lives in Michigan with her favorite alpha male, Brian, and their two sons where she occasionally gardens and cooks. Living in snow gives her the perfect excuse to get lost in reading and writing.

I am a “plantser” which means I start writing as a “pantser” and then stop partway and give characters and plot some structure. I do research beforehand and during writing, which adds to the creative mix.

Absolutely! I let them run the show. That’s where the best, insightful parts come.

I like the combination of chocolate and peanut butter.

I’d like to go to Iceland (more Viking research and the island is beautiful). I’ve also wanted to hike Hadrian’s Wall for years. That’s a “someday” dream.

No. Waiting for a Girl Like You is 2 stories in 1 book and both take place in southern California.

Yes. I looped U2’s “One” and Rolling Stone’s “Beast of Burden” a lot. Then I listened to some Norah Jones and City and Colour’s “Lover Come Back.”

The second story is AJ’s romance with Jennifer, a former trophy wife figuring out what’s next for her. AJ is the rough-edged working man she’s seen around town, but circumstances put them together and the chemistry is hot and sweet.

I’ve been published three years now and my eye-opening realization is that publishing is really a version of the entertainment industry. The fads. The who’s hot and who’s not. Your sub-genre may not be in vogue today, but keep writing. It will most likely cycle around again.

Yes. The publisher of my first book, Norse Jewel (a single title Viking romance) asked me to cut the book down to category length. I agreed (so I take full responsibility for the decision). I wished I would’ve honored the story as it was originally written.

Make writing a daily, disciplined habit. Write what you love, what makes you happy.

One of my all-time favorite books is Josie Litton’s Dream of Me. I don’t have an auto-buy author.