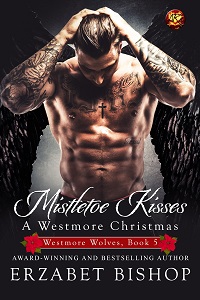 With some gifts, it’s all about the unwrapping...

Jess looks forward to a holiday season of saving puppies and working at the shelter. With her new sister-in-law taking over the Yuletide Gathering, it’s run for the hills or wind up covered in glitter. What she doesn’t anticipate is her brother lining up yet another in a long string of bodyguards. She might be a wolf who can’t shift, but that doesn’t mean she needs anyone’s protection. When things heat up during the festivities, she finds herself face to face with the one man who just might hold the key to her heart.

It was supposed to be a two-week Ops for ridding the world of hybrid wolves, not a babysitting gig for the spoiled sister of the Westmore Pack Alpha. But when Thorne sets eyes on the curvy brunette, he finds a fierce beauty with a soft interior just begging to be tamed, and he’s just the gargoyle to do it.

About the Author:
Erzabet Bishop has had a love affair with books since she first started reading. Just recently, she discovered that writing naughty stories was even more fun. She lives with her husband, menagerie of dogs and a mountain of books she is sure will crush her one day in her sleep.