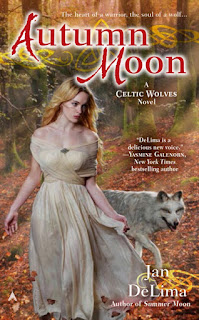 The heart of a warrior, the soul of a wolf, and the desires of a man…

For centuries, Cormack has lived between worlds—a man trapped in the body of a wolf, shunned by humans and shifters alike. Only one person has ever welcomed his company: Elen, a kindred outcast who is feared by others of her ancient Celtic race for her strange healing abilities.

Cormack has always valued Elen’s kindness and understanding, but after a desperate act of friendship causes Elen to free him from his curse, he realizes he wants more. He wants all of her—completely and forever.Except before Cormack can win Elen’s heart, Pendaran, the evil leader of the Guardians, captures her, determined to manipulate her incredible power to aid him in his twisted war against the shapeshifting tribes.

When I saw the subtitle Celtic Wolves, I thought this was a novel set in historic Celtic times, as I don't normally read modern urban fantasy.

So, while the book is set in modern times, the setting and tone do feel quite historical in theme. We have tribes, herbalism, shape-shifters, magic, customs and healing all part of everyday life.

This is the third book, I'd recommend you start with the first two, as things can get a bit confusing at times in reference to things that happened in the past.

Cormack and Elen are part of an immortal Celtic tribe of shape-shifters, but intermarriage with humans over the years has made some of their magic weaker than it used to be, and some are born without the ability to shift at all. Cormack was one of these, he'd been born as a wolf and didn't have the ability to shape-shift into human form, even though he had human thoughts and feelings. He's loved Elena for over three hundred years but up until now he couldn't tell her.

Six months before this book starts, Cormack finally got to shift into human form, but now he's avoiding her and Elen doesn't know why.

That's not the only problem - the Guardians, those Purebloods who think all those from the tribes who can't shape-shift should be culled are interested in war once more. The leader of the Guardians, Pendaran, has been trying to court Elen for those six months - and he doesn't want to take no for an answer.

This book had a bit of everything, romance, adventure, great world-building and plot. It almost had a fairy tale feel to it and the writing at times was very lyrical and poetic.

I adored both Elen and Cormac, and we got to see inside both their heads, which was a bonus. I like to get both points of view in a love story.

A beautiful, entrancing read. Jan DeLima knows how to weave a spell with words. 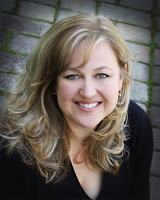 Jan DeLima is the author of the Celtic Wolves novels, including Summer Moon and Celtic Moon. She lives in Maine with her husband and their two sons. Unlike many authors, Jan didn’t pen stories at an early age, but she has always been a dedicated reader.  It wasn’t until after her children entered school that she began writing. Raised in a military family, she lived in different countries such as Thailand and Germany, but home base has always been Maine. 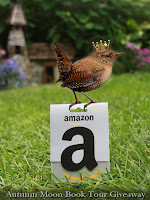