Book Review & Giveaway: Through His Heart by Deborah Camp 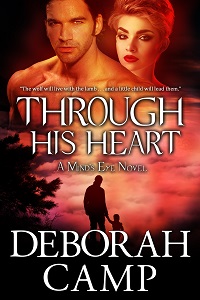 “Sending you an SOS.”

When psychic Trudy Tucker hears this plaintive cry in her mind and then connects psychically with a little girl’s kidnapper, she is drawn to a small town in Missouri where everyone is suspect – including herself and her lover, celebrated psychic detective Levi Wolfe. As she and Levi work together to sort through whom and what to trust, an innocent life hangs in the balance.

Add it on Goodreads

Trudy Tucker is on her way home for Thanksgiving and to bring her lover Levi to meet the family, when she connects psychically with a little girl who's been kidnapped. At first it's only the little girl she's chanelling but soon she connects to the kidnapper as well, but has no idea who he is or why he's taken the little girl.

The kidnapped girl turns out to be Levi's step-sister, one of two he's never met and doesn't really want to. He escaped long ago from the clutches of his father, religious zealot, John Comfort and he wants nothing to do with him or his new family.

But Trudy wears him down and he agrees to go back to his hometown, but insists he is only there to support Trudy. He doesn't want to meet anyone involved. Levi may have escaped physically, but mentally he's still an abused little boy trying to come to terms with the ghosts of his past and at the same time be strong for Trudy. And if he doesn't find a way to cope, then another innoncent child's life may hang in the balance.

Their investigation is blocked at all sides by sceptical law enforcement and by the locals who accuse them of being devil-worshippers and the spawn of Satan.

This was the third book in the series, so I think you will get more out of it if you read the first two, as you will gain more insight into the characters. However, I hadn't read the first two but I was still able to dive in and figure out what had happnend in the past and who everyone was without too much trouble.

The pace was quite fast and flowed well and there was a good balance between the romance and the suspense. It could have done with a bit less sex though, it seemed to slow the pace down somewhat in those scenes and I don't think all of them were needed.

Levi was a flawed hero, he wasn't perfect and although I thought I understood him, there were some parts where I wasn't sure I liked him. A couple of times he went very caveman on Trudy if she even looked or talked to another man, even if it was to do with the case, all 'You're mine. I don't wany anyone else to have you', that sort of thing. And one of the main reasons he proposed was because he thought an engagement ring would scare other men off, that Trudy was marked as his. Hmm, no. That didn't seem romantic to me.

Trudy, however, loved him flaws and all, and although they do have their spats, they do work through things as well, especially his unfounded jealousy. I'm not really sure where the jealousy came from, as Trudy (in this book at least, I can't speak for the others) showed no interest in anyone else and it was obvious that she was madly in love with him. Maybe Levi was just a bit insecure?

Levi finally confronts his father after all these years and I really liked that this was a confrontation; Levi didn't forgive his father. Some things are so bad that forgiveness isn't an option. What John Comfort did to his own son was appalling and I for one was glad that Levi didn't suddenly forgive and forget.

But the confrontation with his father was the catharis that helped Levi finally open up to Trudy about his past. He'd been so afraid that if he told it all, Trudy would leave him. But Trudy is a tough woman and she is with Leo for the long-haul.

All the characters were well-drawn, but we get to see the most of Trudy and Levi, which should be the way in a romance novel.

Lots of secrets, intrigue and mystery abound in the book and it doesn't end on a cliff-hanger, although there is a part that will ease you into book 4 if there is one.

Still, an enjoyable read despite some of my problems with Levi and some of his attitude.

Author of more than 45 novels, Deborah lives in Oklahoma. She has been a full-time writer since she graduated from the University of Tulsa. Her background as a newspaper reporter and editor helped her to write fast and enjoy research. After she sold her first few books, she quit newspaper work to become a freelance writer and novelist. Deborah's first novel was published in the late 1970s and her books have been published by Jove, New American Library, Harlequin, Silhouette, and Avon. She has been inducted into the Oklahoma Authors Hall of Fame and she is a charter member of the Romance Writers of America. She is also a member of the Author's Guild. She is an active volunteer with the Animal Rescue Foundation and is a foster home for dogs until they find their forever homes.