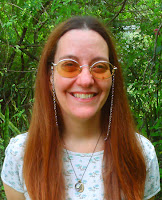 Juli D. Revezzo loves fantasy and Celtic mythology and writing stories with all kinds of fantastical elements. She is the author of The Antique Magic series and the Paranormal Romance Celtic Stewards Chronicles series, New Adult romance Changeling’s Crown, and many short stories. She is also a member of the Independent Author Network and the Magic Appreciation Tour.

Hi, Annette, thanks for having me. Let’s see…. I plan my stories a little, but I like to let them do what it will. If I plan too much, the writing seems to stop.

I’m like Garfield. I love lasagna, all Italian food, really, but lasagna’s a favorite. :)

I’m more of a night owl, these days. I seem to do my best writing after, at least, 2pm.

Ireland. I’ve always wanted to see the Emerald Isle. I’d love to see the landscape that ties into my books (Druid Warrior’s Heart specifically) firsthand.  - go, it's beautiful, but I may be biased ;)

Yes. The heroine of Druid Warrior’s Heart owns/is keeper of a battleground sacred to the gods, in a small area of Ireland. (They later move to Florida, but that’s a different era and book :)) I know I couldn’t go see what her area looked like in the 16th century, when Druid Warrior's Heart takes place, but still, I'd love to visit the island.

It depends. While I’m writing the first draft, yes, for the most part. When I’m editing, I find I can’t.

Druid Warrior’s Heart continues my Celtic Stewards Chronicles fantasy romance series. The series follows a family, and Druid Warrior’s Heart specifically, goes back to the next generation. The steward this time, Ruth Macken, lives in Ireland in the 16th century. She knows—or rather, has been taught—that a group of mythic, sacred warriors from the Tuatha dé Danann will arrive one day, and ask to use her land to stage yet another round of battles against their evil foe Balor who intends to destroy the Earth, and all Ruth has come to know and love. With them will come a guardian who will protect her from Balor’s nefarious plots, and with whom she’ll fall in love. 

A whole lot! It’s easier—and harder—to do things myself. Promotion sometimes takes up as much time as writing (or more!). Plus, I know my writing has improved, from where I started out all those years ago.

I would say, I’d probably start seeking publication earlier than I did, but then again? It might’ve been good that I waited until after high school to begin sending stuff out. Who knows?

A fantasy author named Michael Moorcock influenced me in my early days. Also, especially for Druid Warrior’s Heart, the medieval authors. I can also point to several indie authors, some who are friends who keep my stubbornness plugging along.

Read widely. Keep learning, keep trying, and if you believe in your work enough, don’t let anything stop you.

As I said above, my favorite writer is Michael Moorcock. I also have enjoyed H.P. Lovecraft, Laurell K. Hamilton, Robert Silverberg, Melanie Rawn, Jolene Dawe, Suzanne G. Rogers, Elizabeth Moon., Virginia Woolf. The list is endless… Same thing with books.  There are just too many to list, but I am currently enjoying The Lunatic Café by Laurell K. Hamilton, and The Mannequin, an historical romance by Suzanne G. Rogers.

Blurb of your latest release or coming soon book. 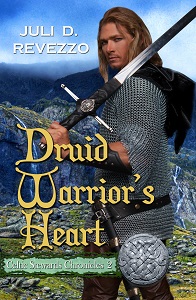 The blurb for Druid Warrior’s Heart is as follows:

As the latest in her family’s long line of stewards, Ruth Macken awaits the arrival of a warrior sworn to the Tuatha dé Danaan, the Celtic gods her family has served since the beginning of time. For on that day, a magical battle will erupt. A war between druids and an evil that will decide the fate of mankind.

Isaac Connel knows the battle is imminent, and is ready to fight, once again but from the moment he sees Ruth flitting around the sacred ground, he’s captivated by her fiery charms and a need to protect her.

Despite Isaac’s assurances and the dreams that guide her, what can Ruth and her lover do to drive off this evil? Despite everything, will the world end at the hands of an evil god?

Your readers can find it available at Amazon:

List of previous books if any:
As I said, Druid Warrior’s Heart is the second title in my Celtic Stewards Chronicles. The preceding title is Passion’s Sacred Dance. I also have a paranormal series entitled Antique Magic. That series comprises, currently, three titles: The Artist’s Inheritance, Caitlin’s Book of Shadows, and Drawing Down the Shades, about a witch in North Florida who works with the Welsh gods, and helps ghosts along their way. I also have a new adult fantasy romance called Changeling’s Crown, (about a mixed up faery godmother), a Christmas themed PNR mystery called Murder Upon a Midnight Clear. I also have a zombie themed-novelette, Bicycle Requiem, and a couple Gothic short stories available: House of Cards and Sing A Mournful Melody. So, quite a few for your readers to choose from.

Your readers can find more about me  at: http://julidrevezzo.com/
And on Amazon: http://www.amazon.com/Juli-D.-Revezzo/e/B008AHVTLO/

(And if you sign up and send me an email, you’ll get a free short story unavailable elsewhere!)

Thank you, Juli and good luck with all your books :)