Nicky English is a journalist, an educator, a podcaster, a couch potato, a dreamer, and a child at heart. Learning is her passion, so is the English language, which she believes is the tool to unlock the door of knowledge.

Born in Hong Kong, she received intensive writing training at The University of Iowa, where she double-majored in journalism and political science. Apart from the Hawkeye State, she’s lived in Chicago and Philadelphia. When she was a guest student at Georgetown University, she fell in love with Washington, D.C. She also has a Master of Arts in Communication. A little side note—she cannot imagine a world without her Mac and iDevices.

Like many crazy ones, she hopes to change the world one day at a time.

I'm a free spirit, so I totally just let the story flow. When I first started writing Florid Eyes: A Novel I only knew I wanted my heroine to be a strong and smart who is unlike every other girl falling in love with a vampire in cliche stories. I sort of have an idea of how I wanted it to end, but I wasn't certain. Part of the reason why I had so much fun writing it was that I had no idea what would happen next. It's a love story as well as a thriller. I set up so many questions and challenges and cliffhangers for my characters without knowing how to answer or overcome them. I'd sit for hours or even days just trying to think of a way to solve the mystery or tackle a problem. I was constantly thinking about how to make my story better. I'd write on my iPhone when I was out if a thought struck me. I was thinking about it 24/7.

Definitely. It was amazing how some characters just had so much chemistry together. I love every exchange between Josh and Arnold. They have this love-hate relationship. Their dialogues are just so fun to read. I literally felt like they were in me. They wrote themselves, and I was just channeling them through typing on my keyboard.


What is your favourite food?

Night owl, without question. I think most writers or anyone who does creative things work better at night. It's the serenity that gives your inspirations.

I'd very much like to visit Washington D.C again.

I'm very particular about staying true to facts, so I only write about what I know or things that I've researched heavily on. I had been to or at least drove past most of the places featured in my book. I also relied on Google Maps a lot to get the distances and travelling time straight.

No. I need complete serenity. I could write in a Starbucks and block the talking because it doesn't mean anything to me, but I can't write and be actively listening to anything.

My pleasure. Florid Eyes is about this smart, high achieving PhD student Violet who gets dragged into the mess of the vampire world. She's forced to go on a hunt with a vampire called Josh for an ancient Native American artifact which is believed to be able to cure vampirism. Josh has been on the run from his own powerful, ruthless grandfather Arnold, but there are always some other malicious vampires too. This time we're talking about some real high-power bad guys from somewhere really far away. The story has some political elements in it, but don't worry it's not too heavy. You don't need to be a political science major to understand what's going on.

How do I even begin? I was a trained journalist, so I'd say I was very confident with my writing, but I knew nothing about creative writing and publishing. I had to learn how to do these things by myself. I thought the most difficult part was finishing the story. I thought once I was done writing the last period, everything else would be so easy. I didn't know how difficult it could be just to format my ebook and to typeset my hardcopy. I did everything by myself, from cover design to marketing. My friends have gotten sick of my constantly mentioning of my book on Facebook I think! The only thing I outsourced was editing. I'm convinced that one can't self-edit. A fresh pair of eyes is always needed. Other than that, I'm just really proud of what I've come so far.

I probably would have started marketing myself on Goodreads and other forums and sites alike much soon to build up a fan base first. I'd have tweeted a lot more too. I'm a Facebook person, not a big Twitter fan.

I watch a lot of TV shows. I was inspired by a lot of good and poor dramas. I learn from people's mistakes and try to take a leaf from someone else's book . If I have to name my influences, I'd say Alfred Hitchcock, Dan Brown and Julie Plec/Kelvin Williamson. I'm very particular about details and facts. I definitely got that from Mr. Brown. There are also lots of suspense in my book, so I got that from Mr. Hitchcock and the Vampire Diaries show. One side note, when I was a teenager, I loved reading R. L. Stine's Fear Street series. I wrote him on Facebook to thank him for inspiring me to like English and reading. He wrote me back and wished me good luck on this book! I cried when I saw it.

Just write. Don't just sit there and talk about writing. You gotta finish it before you can really show people how good a storyteller you are.

It's hard. I wish I could name at least three! Dan Brown's Angels and Demons. 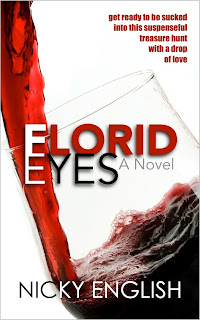 Get ready to be sucked into this suspenseful treasure hunt with a drop of blood.

No one has ever questioned Violet Lancaster’s ability to change the world. As a brainy and self-righteous PhD student at the prestigious Georgetown University, Violet is determined to make a name for herself in Washington, D.C., by working hard to pay her dues, but her moral system is turned upside down when she runs into a man in distress on a lonesome night.

Josh Levinson was born into an elite Philadelphia family in the year 1776, when the thirteen colonies declared independence from Britain. Together they break every human and supernatural law to hunt down a mystical Native American bow and arrow in hopes to liberate an entire species and to keep it from the evil tyrants from the Far East.

Florid Eyes takes you on an intricate adventure intertwined with an epic romance.

This is my first novel. I've written exam prep books under another name.