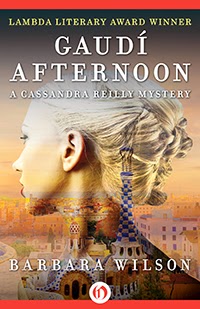 Professional translator and amateur detective Cassandra Reilly travels to Barcelona in search of a missing man—but finds much more than she bargained for in this mystery, hailed by the New York Times as a “high-spirited comic adventure”

American but with an Irish passport, the itinerant translator Cassandra Reilly is living in London when she receives an unexpected phone call. The voice on the other end belongs to Frankie Stevens, a San Francisco transplant with an unusual request. Her husband, Ben, has gone missing—presumably in Barcelona—and Frankie needs a translator to help her find him. Not one to pass up a well-paying gig or a free trip to Barcelona, Cassandra takes the job. But she quickly realizes that all is not as it seems.

Frankie’s charm is matched only by her guile. As Cassandra chases down leads in search of Ben, she becomes increasingly tangled in a web of half-truths—and caught between former flames Ana and Carmen.

Winner of the British Crime Writers’ Award for Best Mystery Based in Europe and the Lambda Literary Award for Best Lesbian Mystery, Gaudí Afternoon is the first book in the Cassandra Reilly Mystery series, which continues with Trouble in Transylvania and The Death of a Much-Travelled Woman, and concludes with The Case of the Orphaned Bassoonists.

Cassandra Reilly is a Spanish translator, working on an epic South American novel when she gets a call from her friend, Lucy, whose other friend Frankie is in a bit of a pickle.

Frankie's ex-husband Ben has absconded to Barcelona and Frankie needs to see him to sign some urgent paperwork, but she doesn't speak a word of Spanish. Cassandra is reluctant at first, but the money Frankie offers is too good to be true and it would be no hardship for Cassandra to finish the translation of the book in Spain.

But as it turns out, Frankie didn't tell her the whole truth and Cassandra, like the reader takes a while to figure it all out.

The pages just flew by, Ms. Wilson's writing flowed so well. It's not a murder mystery, but more asking the questions - who are we? And do how other people see us define who we are or who we would like to be? There is genderbending aplenty in this novel, with mistaken identies and mistaken genders galore, which lost a bit of its sparkle after the third of fourth time it happened.

Some things were a bit dated, such as cameras with film which needed to be devoloped rather than digital, which most people would use nowadays. I suppose professional photographers might still use film for some things, but Cassandra was definitely not a photographer.

I've never been to Barcelona, but the author described it so well that I almost think I have been. It was a fun, light-hearted read despite some of the subject matter and the parts of the other novel Cassandra was translating were hilarious. I was very disappointed though near the end, when the secret of Raoul's black bag was about to be revealed, and Cassandra's briefcase got stolen so we never found out and neither did Cassandra.

An enjoyable jaunt with a very likeable narrator and I just adored Carmen, the Spanish hairdresser who is Cassandra's on-again/off-again lover, she was just so vivid and vivacious.