Karen J. Hicks is retired and lives in Henderson, Nevada. She recently published her second novel, The Coming Woman, based on the life of the infamous feminist Victoria C. Woodhull, who was the first woman to run for U.S. President. Her first book was a self-help book titled The Tao of a Uncluttered Life. Karen served as in-house editor for author Steve Allen and has written several screenplays, as well as poetry, short stories, and essays. To learn more, go to http://www.karenjhicks.com/

I’m more of a seat of the pants writer.  I get an idea for a story and sit at the computer and dash out a brief synopsis or short story of it.  Then I start adding details – various “scenes” that expand on the idea.   I think using scenes comes from my days of writing scripts.  THE COMING WOMAN was actually written as a script first, as is the novel I am currently working on.

Once I get scenes visualized, I print them out and then arrange them in an order that seems coherent.

When I start putting them all together on the computer, I visualize myself as the reader and what I want to read next – what questions I need answers too, etc. – so the scenes get moved around even more, as well as some added and some deleted.  I print out a first draft and then the real process of writing begins: the editing!

THE COMING WOMAN was a bit different, however, because history provided the sequence of events. The biggest problem I had with this book was that there was so much material I really had to pick and choose carefully to keep the book focused.

Because my first book was a non-fiction self-help book, there were no characters and with the second book being historical, the characters’ actions were already a part of history.  But in the book I am currently working on – a romantic novel – they have certainly had a say a time or two on how they want to react.  I feel more like I am channeling them than creating them.

I love sushi, but I also crave a good steak every so often.

I’m definitely a morning person.  Being raised on a dairy farm probably set that pattern.   Living in Vegas, the summers get pretty hot so I get up before dawn to walk.   I like to write in the mornings as it is so quiet and my mind is refreshed from the night’s sleep.

I’m actually not a big traveler.  My son was married in the south of France (Nice) so that was an incredible experience to go there, but I’ve never wanted to see the world.  I love being an armchair traveler, though, and learning about other countries and cultures.  I prefer to drive to more local areas and visit national parks and nature rather than cities.

I listen mostly to ocean and rainforest environmental sounds and Native American flute when writing, although I occasionally add such artists as Enigma, Vangelis, Enya, Ottmar Liebert, R. Carlos Nakai, and Cusco.  A lot of times I just like the quiet though.

THE COMING WOMAN is based on the life of the infamous 19th century feminist, Victoria C. Woodhull.  Victoria was the first woman to run for President (1872), before women could even vote.  She was also the first woman to enter the male-dominated halls of the Senate Judiciary Committee, where she petitioned for woman’s suffrage.  A popular orator, she and her sister and side-kick, Tennessee Celeste (Tennie C.) were also the first women stockbrokers on Wall Street and the first women to run a mainstream newspaper.   Victoria’s nemesis is the famous Brooklyn preacher, Henry Ward Beecher, whose hypocrisy she saw as epitomizing the hypocrisy of society during what Mark Twain called The Gilded Age.  When his secret affairs are exposed by Victoria, it causes life-changing consequences to not only the individuals involved but society as well.

You just have to be brave and persistent and what you write will find its intended audience.

I would have been braver and more persistent earlier in my life.

My high school English teacher had the biggest impact on me.  Rather than follow the usual lesson plans, one semester she had us each write a novella, each week including the words from our spelling/vocabulary lists.  She would read parts aloud in class and mine was frequently shared with high praise from her.  Since I was a small child, I had enjoyed making up stories, but her praise made me realize I would like to someday use what talent I had in my career.  I kept in touch with Mrs. Carlson until her passing at age 96 earlier this year and she has continued to push and inspire me to pursue this dream.

No one else can tell the story like you so listen to yourself and remove any naysayers from your life. And just do it.

I have so many.  I don’t think I’ve ever met a writer I didn’t like.  Nora Roberts/J.D. Robb amazes me with how versatile she is in her writing.  Shel Silverstein was a genius.  My friend Kinky Friedman’s mystery books entertain and enlighten. 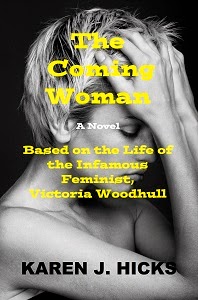 The Coming Woman, by Karen J. Hicks, is a novel based on the life of feminist Victoria Woodhull, the first woman to run for U.S. President. Victoria Woodhull had the courage to enter the political arena before women had won the battle to vote. This is a timely, relevant, and compelling look at one of the women who paved the way for women like Hillary Clinton to claim their place on the national stage and in our history books.

She was the first woman to enter the Senate Judiciary Committee chambers to petition for woman's suffrage, her argument changing the entire focus of the suffragist movement by pointing out that the 14th and 15th Amendments already gave women the vote.

In her campaign for the Presidency, Victoria Woodhull boldly addressed many of the issues we still face today: equal pay for equal work; freedom in love; corporate greed and political corruption fueled by powerful lobbyists; and the increasing disparity between the rich and the poor, to name only a few. Her outspoken and common-sense ideas may shed a new perspective on the parallel conundrums of today’s world.

This bold, beautiful, and sexually progressive woman dared to take on society and religion. To make an example of the hypocrisy in what Mark Twain dubbed The Gilded Age, she exposed the extramarital affairs of the most popular religious figure of the day (Henry Ward Beecher). This led to her persecution and imprisonment and the longest, most infamous trial of the 19th century. But it did not stop her fight for equality.

Victoria’s epic story, set in the late 1800s, comes to life in a modern, fictional style, while staying true to the actual words and views of the many well-known characters.

The Coming Woman was published by Sartoris Literary Group in August 2014 and is available for sale on Amazon and Barnes & Noble. Genre: Women’s Fiction / Historical

Praise for The Coming Woman:

"If you have a heart, if you have a soul, Karen Hicks' The Coming Woman will make you fall in love with Victoria Woodhull." - Kinky Friedman, author & Governor of the Heart of Texas

"What kind of confidence would it take for a woman to buck the old boy's club of politics in 1872? More than 140 years pre-Hillary, there was Victoria Woodhull. This book takes you back with a breathtaking, present-tense bird's eye view into a time when women's liberation was primarily confined to one woman's very capable, independent mind. I couldn't put it down." - Ruth Buzzi, Golden Globe Award winner and Television Hall of Fame inductee

"The Coming Woman is a great read and a long overdue biography written beautifully by Ms. Hicks. Victoria Woodhull comes alive in each and every paragraph; a vital strength and spirit in Woodhull propels her to run for president of the United States when women weren’t even allowed to vote! What a woman, what a book! An inspiring must read for every woman and any adventurous men! Thank you, Ms. Hicks for finally telling her colorful story." - Jennifer Lee Pryor, author of Tarnished Angel: A Memoir and President, Indigo, Inc.