1. Tell us a little about yourself.

I am an avid reader. You might say an extremely passionate reader. For as long as I can remember, I read. Whether it was historic America or Europe, Narnia, Middle Earth, or the Four Lands of Shannara, I spent hours of each day of my childhood in the worlds authors had created. Before kids, my Mother had been a high school English teacher and she taught me and my siblings the joy of reading. By the time I was 12, she had read A Tale of Two Cities, The Hobbit, Les Miserables, and Where the Red Fern Grows to us, among many, many others.


2. When did you start writing, and why?

I wrote for fun in high school and college, thinking I was a better writer than I truly was. I attempted poetry, short stories, and even a song or two with little to no success. I wrote in some ways because it was easier than to verbalize. I never was good at speaking in public. When I did, to include briefing Generals as an Army officer, the number one thing I did to prepare and have success was write a “speech” to make sure I truly internalized what I had to say. Yes, writing has helped me speak.

For a couple years I had a blog where I wrote Non-fiction posts about experiences (to include time spent in Africa and Iraq) and beliefs. For the last year or two I have focused on writing Fantasy. What do you enjoy about what you write? Surprising myself. As I write about a character for example, I keep finding more small details about the character that I never thought of before, small nuances and traits. It keeps me involved and interested to find out what will come out of my head next! The ever involving and living world is what keeps me coming back.

4. What is your latest book or series?

5. "Welcome To My Worlds": Tell us a little about the world of your latest book or series.

The Tri-Islands are generally peaceful and inhabited with several normal and not so normal living things. There are humans, the largest kingdom is Astar, direct descendants of the first humans to come to the land. The human enclave of the Seekers are scientists who study the solar realm and attempt to contain its power. The Savoq are a tribal and nomadic race of human that inhabit the south. They are in constant war with each other.

Then there are Goblins who inhabit the hill country in the West and are renowned for their mining and metal works. The humans and Goblins have a wary peace, only having contact through trade. The last race in the Islands is the Ash. Little is known about them, only whispers and tall tales.

The world is set in a typical Epic Fantasy medieval setting with a couple exceptions, mostly relating to the more Science-focused equivalent of magic. There is also a bit of steampunk.

6. Introduce us to some of your characters. What do you like about them?

I will introduce you to the 2 main characters Oliver and Ethan.

Oliver is in his late teens and is of the Seeker order. He has excelled in his studies though he has always wished to travel outside the confines of the Sun Fire Citadel (city of the Seeker’s) and use the Seeker’s knowledge to help the greater world. His attempts to leave forced his father to place him under the tutelage of the greatest of the living Seeker’s. He is unsure of himself, never having the opportunity to prove himself or test his willingness to go into danger.

Ethan is the eldest son of the King of Astar and an Oskara Knight. Though the Oskara order is held in high regard in the land, it is unusual for a royal to join their ranks. His family viewed his choice to become a Knight as turning his back on his blood, tarnishing their honor. His family has little to do with him, though the King has no problem using his expertise as a diplomat when necessary. He is well trained and sure of his abilities and has forged friendships with other like-minded people, those that wish to serve and protect the people.

7. A fun fact you would like your readers to know about you or your book.

I used past experiences to build parts of the world. The Savoq and their lands are based off my time in Iraq and Kenya, while a few of the situations the characters go through are ones that closely resembled ones that I lived through. See if you can guess which. ;)

8. Blog/site link, and where your book is available.

You can contact me and find links to purchase my novel at: https://borderleinpublishing.squarespace.com and you can follow me on: https://twitter.com/MarkLein12 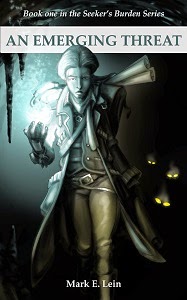 An evil stirs, casting a shadow across the Islands. Two men begin quests to find the source of the darkness. One is a young scholar, given no choice but to follow the path ahead. Tragedy shapes him, nearly driving him to despair; an inner struggle pervades his journey.

The other is a warrior forced to the task through a sense of responsibility. His royal blood and his knighthood drive his course. Their searches, though separate, have the same goal: to find whatever or whoever may be responsible for the darkening of their world.

This book tells the story of their journey and the creatures, both friend and foe, that they meet along the way. 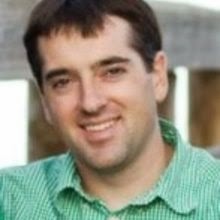 Mark grew up in small towns across the country, spending most of his childhood in the foothills of the Ozark Mountains of Northwestern Arkansas.

Throughout his life, his favorite books have been sci-fi and fantasy, anything Tolkien, C.S. Lewis, and Terry Brooks and a little Isaac Azimov.

Graduating from college in 2004, he became an Army Infantry and Intelligence Officer and continues to serve to this day. While deployed to Iraq for 14 months back in 2007-09, he began writing with this book in mind. His civilian work includes Intelligence Analysis and providing expertise with military training programs.

He now lives in Tampa, Florida with his wife of 9 years, Emily, and his three children, Oliver, Lucy, and Alexander.