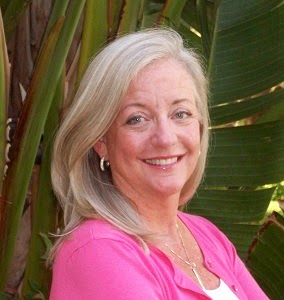 
A self admitted book addict, Valerie was the kid with the flashlight under her pillow, reading in bed long after lights out.  Her exposure to different cultures led to a pervasive interest in people, with degrees & teaching credentials in Cultural Anthropology & English.

SHATTERED Logan Book One, the first in her great, new mystery series, just came out, and you should stop reading this bio and buy it immediately! She’s already busy working on Book Two, with the support, distraction and love of her husband and ever-expanding family of six, plus spouses, children, dogs and a lovely lemon tree on the patio.

Since this was my first attempt at a novel, I tried several methods. First, I plotted the story from start to finish with different color sticky notes for each character along a plot and sub plot lines with arches and dips. That got unwieldy quickly, although it did make a nice decoration for my dining room one summer. Then, I switched to Excel, which was a little better.

That all helped, but since you don’t know the ending up front, you have to be flexible as the story changes while you’re writing it.

My stories are character driven, so eventually, I just relaxed and let the story go where they want it to.

They definitely have minds of their own, some stronger than others. I like creating a rich, full character, then putting them in a situation. From there, I just sit and let them speak and act for themselves.

What drew you to writing in particular?

Books have always been a source of solace and of simple enjoyment for me. In my 30s I was going through a series of challenges: divorce, single parent, loss of faith in my church, and a back injury that kept me flat on my back for almost a year. During that time authors like Sue Grafton, Nevada Barr, John Grisham, and Michael Connelly kept my mind occupied at night, when I tended to do the hampster-wheel-worry-what-if dance.

So, as I recovered and rebuilt my life, I decided I wanted to write a good story that might keep someone else entertained during times of stress in their lives.

Yes, my first 2 books were a poetry book, TILTING WINDMILLS, and a non-fiction book, SATURDAY SALON: Bringing Conversation & Community Back Into Our Lives. It covers the history of conversation salons, and talks about one I created and hosted for about 10 years. It’s also a guide to hosting one of your own and shares some of our favorite potluck recipes over the years.

I really love food, so this is a tough question!  Hmmm….if I had one last meal, it would have to include fresh blackberry cobbler a la mode :) Roast chicken, tossed green salad sprinkled with pine nuts, french vinaigrette, steamed broccoli, corn on the cob, sourdough rolls, and a really good wine. I'm not supposed to have gluten, but if it's my last meal, who cares?

Now this is an easy question   Morning person for sure, although, by virtue of being a frequent insomniac, I am well familiar with 2:00 AM in the morning.

I lived in different countries growing up – Germany, Italy, Japan, and later, Luxembourg, so I don’t have a huge urge to travel. Also, travel is not as easy as it once was…but if I could spirit myself to different places, I’d like to explore Scandinavia and the British Isles – stay in a little cottage by the sea, or hike around New Zealand.

My plan is to have each of Logan’s adventures take place in a new setting. In SHATTERED, we get introduced to her small, coastal community in Southern California. I went up to the Northwest – Portland, Oregon – for her next adventure. I lived in that area years ago, and have always loved green, beautiful places. I also love the Portland ‘vibe’ – grass roots arts and politics. Who knows where she will go next?

Only classical-Tchaikovsky violin concertos – or similar – if it has a beat or lyrics, I listen to the music vs writing – my brain is distracted easily! 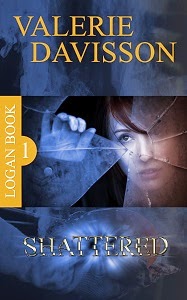 In the first book of my series, SHATTERED: Logan Book 1, you meet a woman much like all of us – dealing with a series of setbacks that require her to totally restructure her life – build a new one from the rubble.

Logan loses her husband, her illusions, the company she and her husband built together and now, probably, her job. But that doesn't stop her from digging into a murder investigation that keeps California’s tight-knit artist community on its toes and the police guessing.

That they are two completely separate activities, and require very different skill sets. Writing comes naturally, marketing has to be learned, practiced, and often done when we don’t feel like it. The world of publishing was in the midst of upheaval when I wrote SATURDAY SALON. I began my education at a writers conference in La Jolla, CA. Through the process of completing that first book, I learned what worked, and what marketing efforts were a waste of time. It was a moving target!

Speaking with other authors and exploring online gives you almost as much information as a pricey conference.

The basic idea of getting your book in front of people – the core purpose of marketing – still holds. The way in which that is done is changing. For example, with SATURDAY SALON I was sending out print copies for almost all review requests. Now, more people want electronic copies, which is much more efficient for me.

None of us are completely original, although we’d like to think so. Everything we read, from cereal boxes to Stephen King, influences us.

One of the first books I really got into as a teenager was REBECCA, by Daphne Maurier. Her style would not sell now – much too long on description, but she kept my attention. I still remember how creepy the housekeeper was, and how she tricked her into wearing the dead wife’s dress.

Now, books are much shorter. I tend to enjoy authors who develop their main character throughout their series. They get married, get divorced, have or lose children, change jobs, move…

Believe in yourself, take your work seriously, and keep at it. Buy THE ELEMENTS OF STYLE. Have a place to write, and a time if you are that organized. Most of us have day jobs. That doesn’t make you any less of a ‘real’ writer. Also, treat your writing like a business – keep receipts.

4th Grade: The Chronicles of Narnia

High School/College: I had a horse, didn’t read as much then – probably Tolkein and C. S. Lewis.
My husband and I selected some of our favorite books and send them around in a rotating book exchange for our grown children. Some of mine – the ones I would want to keep if forced to select:
The Prophet by Kahlil Gibran
The Art of Happiness by the Dalai Lama
The Tao of Pooh & the Te of Piglet
Gift from the Sea Anne Morrow Lindbergh
The Great Divorce by C. S. Lewis
The Grapes of Wrath by Steinbeck

In SHATTERED, the first in Valerie Davisson’s original mystery series and stunning fiction debut, Logan McKenna loses her husband, her illusions, her music, and now, probably, her job. But that doesn't stop her from digging into a murder investigation when her best friend, Thomas, a Native American artist, is the primary suspect, and law enforcement is left guessing.

SATURDAY SALON: Bringing Community & Conversation Back Into Our Lives, and TILTING WINDMILLS, a poetry book currently out of print.

You can find me on Facebook at Saturday Salon or Valerie Davisson.
Also, http://valeriedavisson.com and http://saturdaysalon.com.