Author Interview & Giveaway: Feast of Fates by Christian A. Brown

Christian A. Brown has written creatively since the age of six. After spending most of his career in the health and fitness industry, Brown quit his job to care for his mother when she was diagnosed with non-Hodgkins lymphoma in 2010.

Having dabbled with the novel that would eventually become Feast of Fates for over a decade, Brown was finally able to finish the project. His mother, who was able to read a beginning version of the novel before she passed away, has since imbued the story with deeper sentiments of loss, love, and meaning. He is proud to now share the finished product with the world.

I formulate a beginning and an end, beforehand. I think it’s important to know how you want to start and what goal you have in mind, what message there is for the reader. Then, I usually just write a few chapters and let the story form itself. Once I have a few chapters down, I then work on smaller a synopsis for each chapter and a larger framework to fill in the gaps. I find that if you start with too many “plot points”, then the narrative can become very stilted and unnatural. It’s more enjoyable when crazy stuff just happens—for me and the reader 

My characters generally take over my stories, and my life outside of my head, too. I focus on characterization A LOT. I really work at making believable people, with real dialog and motivations. It’s not uncommon for me to become so immersed in a manuscript that I talk in my sleep, or wake up after four hours rest utterly galvanized and ready to write.

Healthy, simple stuff. Salads and lean meats. Fish and veggies. If I had to pick a type, probably sushi/ sashimi, since its light and leaves you satisfied without being bloated.

One of those annoyingly awake morning people. I’m chipper and pert while everyone else is yawning and farting themselves awake (the farter in the house knows who they are )

Many places in the old world. Sites of ancient myth and magic. Depending on when this interview goes live, I may have seen a few, since I’m off for a romp around the UK this Christmas. Plenty of the ancient world to see there. If Outlander has taught us one thing though, it is to keep my hands of mystic standing stones. I have too many books planned to be derailed by marriage to a highlander of a bygone age.

Oh yes, very much so. As I implied I’m addicted to myth and lore. I also enjoy the “journey” narrative, of a quest to reach something across a long distance. As we know, it’s often the journey that defines us, more than the goal.

Classical usually. Sometimes, however, I write best in silence.

Feast of Fates is classified as a fiction/ fantasy/ romance/ epic. (Those are literally its BISC categories) In my own words, the story is about love. Love when it is bright, golden and beautiful. Love when it is twisted to the blackest hate. Feast of Fates is an exploration on these various shades of feeling. I do not shy away from realistic or painful scenarios, reader be warned.

Oh my. Way too much to fit into a paragraph or two. I guess that the most important thing, if you’re serious, is to treat writing like a business. That means clock in your hours, be open to criticism and “performance improvement”, and respect the environment and people with whom you work. Also, consult professionals, often. Establish a stable of visual artists, graphic artists, web designers, editors, proofreaders and PR folk. I believe that we are inherently responsible for our success, or failure. On the subject of failure, I’ve done that, many times in many ways throughout this journey. But the important thing is to pick yourself up and keep moving forward.

Nearly everything! Moving into production of my second book now, it’s amazing how smooth the process is, since all the stumbles are out of the way. Still, I wouldn’t trade my failures for anything.

The time I spent with my mother during her illness (lymphoma). I discovered new depths in myself for love, devotion, and a deeper appreciation for life—and death. I’m also influenced by language in general. English is a diverse and almost never-ending playground for the mind. We have so many words and intimations that I have yet to find something that I cannot express.

Refer to my above comment on “writing and publishing”. Also, don’t ever give up, if this is what you feel in your heart you should do.

Such a tough question… Timothy Findley, for his dialog and characterization. Neil Gaiman, for his eccentricity. Tolkien, for the scope of his vision. Ursula K. LeGuin, because she’s just an all-around breathtaking storyteller.

I’m going to cheat a little and use an editorial review snippet. I feel it sums up everything nice one could say about the series.

"In this rousing epic-fantasy debut, two unlikely lovers forge a bond in the midst of a war between immortal kings. It would have been difficult for Brown to present a more sensual, or satisfying, debut. His motifs run the epic-fantasy gamut, from ancient forests pulsing with life to malevolent phenomena looming in the depths of space. His excellent prose, however, truly sets this book apart from the fantasy herd. Every page crackles with images full of vibrant emotion. An unmissable fantasy tale that marries gorgeous prose to a lavishly detailed plot." 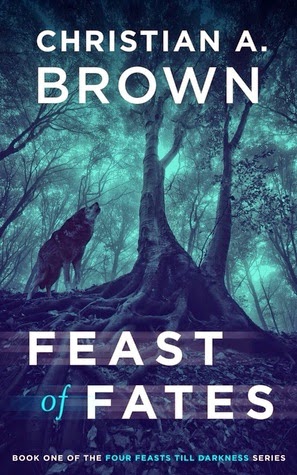 "Love is what binds us in brotherhood, blinds us from hate, and makes us soar with desire.”

Morigan lives a quiet life as the handmaiden to a fatherly old sorcerer named Thackery. But when she crosses paths with Caenith, a not wholly mortal man, her world changes forever. Their meeting sparks long buried magical powers deep within Morigan. As she attempts to understand her newfound abilities, unbidden visions begin to plague her--visions that show a devastating madness descending on one of the Immortal Kings who rules the land.

With Morigan growing more powerful each day, the leaders of the realm soon realize that this young woman could hold the key to their destruction. Suddenly, Morigan finds herself beset by enemies, and she must master her mysterious gifts if she is to survive.

Available at Amazon and Createspace